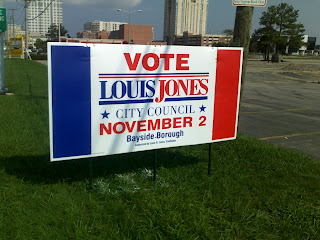 With the November election around the corner, the campaign signage is starting to hit the streets. This sign of Louis Jones' is in the periphery of Town Center.

First, "Bayside Borough"? Uh...the term "borough" was retired when we went to the 7 balanced districts. In 1995.

Second, the color scheme is from the French flag. Better be glad relations with Paris are better than in fairly recent memory.

It does look like the French flag. Let's hope he doesn't surrender!