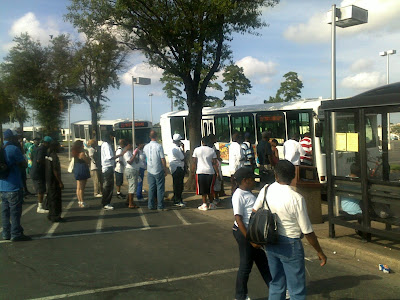 I took the above photo this afternoon at the Military Circle Transfer Center during the 4:45 P.M. lineup. In the foreground is the Outbound Route 15, Naval Station via Evelyn Butts and Wards Corner. You can see the long line to board that stretches off the photo to the left.

First, this is on a Saturday afternoon. Saturday is the sixth slowest day of the week for bus ridership (Sunday is seventh), yet that is happening. A pleasant (in the short term) but problematic (in the medium term) trend during latter FY 2010 for Hampton Roads Transit (HRT) was that the big increases in ridership were happening on the weekend. Given that fewer buses run then, in subsequent years that will probably mean having to add more weekend service to handle the demand. The long term upside of this is that the trend means more people are abandoning their cars, helping relieve congestion on our region's roads.

Second, for the "empty buses" crowd, just look at the above. The 15 was hardly going to leave empty.

FYI, I just got a smart phone with camera and video capability this Summer. As I master it's functions, I hope to have more photos for this blog. For those of you who don't ride the bus, that should include more scenes like this to bring home the reality of what's going on out there.
Posted by Avenging Archangel at 9:43 PM

One bus on one given day is not quite the litmus test I'd be looking for, but a gallant effort to make your point.

The ridership trends from the HRT figures I cited show that picture wasn't a fluke.