If you haven't seen it yet, posted below is the candidate questionnaire for the seat on the Virginia Beach City Council being vacated by Rita Sweet Bellitto.

What struck me are two glaring omissions. First, no specific question on transportation, despite that being a regular Top Priority coming out of Council Retreats. Second, nothing on the ongoing City Redistricting process, which will be one the hot button issues the interim appointee has to deal with.

Two questions caught my attention. On Question #10, does the City government think they have simply a public relations problem? While the City is handling that matter much better than 10-12 years ago, there are other measures they could take but aren't. In addition, I want to see John Moss' answer to Question #14. How does he reconcile trying to grow the economy with the draconian steps his extremist Virginia Beach Taxpayers Alliance (VBTA) wants the City to take, which would inevitably send investment elsewhere? 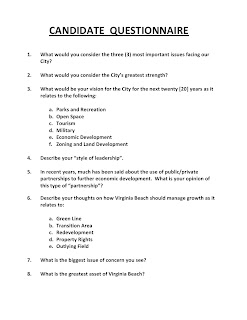 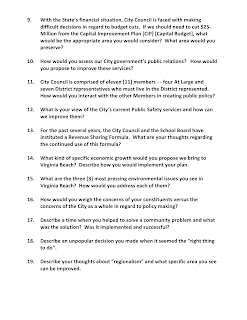 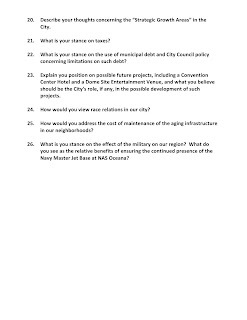 Posted by Avenging Archangel at 6:41 PM

Henry: You are astute to point to the missing issues. As you well know the resume process is "lip service"to appease and present apparent fairness and objectivity. In all likelihood, the prospective selectee has already been approached and told to submit a resume that will be coached (or ghost written). Avoidance of public divisive issues can easily be avoided. Do you agree?

While I agree that some on Council have probably discussed the vacancy, I have a couple problems with your theory:

1. Too cooked a process would obviously be a sham.

2. The questionnaire is a chance for Council to shape the debate for this Fall's special election.